If you're thinking about adding a pet to your household, seriously consider going to your local Humane Society before spending hundreds of dollars on an animal complete with lineage papers. Mind you, I have nothing against purebreds, but with so many dogs and cats sitting behind cages without little chance of being freed, you could be a savior to one of them.

Over the years we've had four dogs, two purebreds, two adopted from shelters. Sassy was a female Schnauzer and Tibbit, a male standard poodle. Sassy was  somewhat difficult to train, and after months of trying we ran out of patience and gave her to a friend who had more success than we did. Tibbit was two years old when we got him, already trained, and fit right in with our family from the get-go. Unfortunately one evening after letting him out for the night, somebody abducted Tibbit from our backyard and sadly we never saw him again.

Our first adoptee was a terrier-beagle mix female with a peppy personality, hence the name, 'Pepper!' She loved to run around the yard chasing anything in front of her, and if need be, going after her own tail when nothing else caught her eye. This little character was my son's 10th birthday gift, but after a week or so of feeding, walking, and playing with her, he receded into the background, thus affording me the opportunity to be chief caregiver. When it was time to have Pepper spayed, we dropped her off at the shelter and expected to pick her up the next day, but instead we got a phone call telling us there was a problem during surgery. Pepper's brain was denied oxygen for a significant amount of time, her lips turned blue, and they weren't sure she'd survive. Our sweet munchkin came home a few days later, but was never the same happy-go-lucky girl from that moment on.

Years later, we adopted Shadow, a female black Lab/beagle mix and for 16 glorious years she has been a joy! We got her at nine weeks, and can honestly say she's been a delight from day one. Training her was a breeze, actually I truly think she trained herself 'in spite of us' instead of 'because of us!' After introducing her to our outside area, within a few days she completely respected the boundaries, never leaving the yard unless leashed and going on a walk. Shadow will not take food from anyone other than myself or my hubby. She allows all seven of our grandchildren to pet, play, and roughhouse with her without grumble or growl (she still holds a grudge against my son for teasing her as a puppy though). However, Shadow is our protector, and when someone approaches the house, she barks incessantly until we give her the Ok!

At her age, our sweet girl sleeps a lot now, but when awakened, she instantly returns to her happy self...most of the time (again she holds a grudge against Lori for approaching her when sleeping). Her appetite is great, and her mobility is hardly compromised. At night she loves to cuddle up next to me and snore away. My hubby likes to do that as well. I guess the old saying that 'men are dogs' has some truth to it after all!

I know the day is coming when Shadow will leave us. I look into her eyes occasionally and tell her that she is the best friend I've ever had and will be sad without her. I know she understands what I'm saying, and I'm certain she reciprocates the same feelings towards me.

Perhaps you think that Shadow was lucky to be adopted by our family, but believe me when I say that we are indeed the lucky ones! She is the best shelter dog we could have ever hoped for, and if you are thinking of getting a pet on the National Adopt A Shelter Pet Day, you'd be wise to visit your local Humane Society. Who knows, there could be another 'Shadow' waiting just for you! 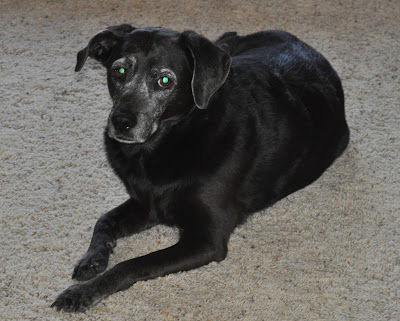 During her professional career, Flo Barnett was a preschool administrator and day-care provider. She also taught kindergarten and elementary school for many years. Now retired, Flo writes hilarious tales for, and sometimes based on the real-life antics of her seven grandchildren whom she lovingly refers to as ‘ Grammy’ s Gang.’ Ms. Barnett has also written a series entitled, ‘ When We Were Kids.’ The books are set in the Fifties and deal with issues such as peer pressure, bullying, abuse, and personal loss. Since today’ s children face the same problems as did their parents and grandparents, this series is geared for ages 9-99.Currently Flo is working on a third series, ‘ Together In Peace And Harmony,’ hoping to encourage youngsters to embrace diversity rather than fear it. She believes that the only way to attain peace in the world is to begin by teaching children at the preschool level to interact positively with others from various ethnic and cultural backgrounds. Flo lives near Pittsburgh, Pennsylvania, with her hubby, Barry, and dog, Shadow.

Together In Peace And Harmony Series, Book 1

No Way To Haircut Day!

When We Were Kids Series, Memories of the Fifties

When We Were Kids Series, Memories of the Fifties